I never intended to make a vegetarian copy-cat of bolognese because I don’t believe in being vegetarian if all you want to do is eat non-meat things that taste just like meat.

So why this vegetarian bolognese? It was entirely the result of Isaiah, who was leafing through one of my vegetarian cookbooks out of some vague curiosity and stopped at a photo of vegetarian bolognese, declaring, “GOOD!” That was his not-so-subtle way of saying, ‘this vegetarian deal is nice and all for you but why am I being punished and deprived of bolognese after being nothing but a kind, patient, and supportive husband?’. Isaiah is all of those things and more, so I came up with this recipe out of the goodness of my heart. It is an adaption of this recipe with many amendments because following instructions is not my forte.

This vegetarian bolognese is savoury, deep, and complex. No, it does not taste like beef. It tastes better. You willl shovel it into your mouth. If you have kids in the house who refuse to touch vegetables even with a ten foot pole, make this. They won’t even know there are vegetables in it.

Here’s what you’ll need. I’m using white button mushrooms because that’s what I had but this recipe turns out better if you use baby bellas. Or you can use a mix of both. I’m all about freedom.

You may be wondering why I put the wine in a wine glass when it’s just going straight into a big pot. That’s because one time I measured the wine into a pyrex measuring glass and it just felt so… wrong. So undignified. Wine should either be in the original bottle it came in, a decanter, or a wine glass. Those are your only options. Be warned that a major drawback of having a glass of wine on your work bench is that you’re most likely going to sip at it the entire time you’re prepping the veggies to the point where by the time you’re ready to use the wine in your cooking the glass will be totally empty and you’ll have to pour yourself another one. That’s ok. There are worse things in life.

Blitz onions in a food processor and mince some garlic. One of my least favorite things in the whole world is peeling garlic. This makes my life very difficult because one of my favorite things in the whole world to eat is garlic. So I end up having to peel a lot of garlic. The biggest problem with peeling garlic is that when you use your nails to get the garlic skins off bits of garlic juice get under your nails and your fingers smell like garlic for forever. My secret to avoiding this is I smash garlic with a blunt object such as the bottom of Isaiah’s nespresso cups. The skins will come right off. The cup may forever smell faintly of garlic but that’s another person’s problem.

This recipe starts with onions and garlic gently cooked in extra virgin olive oil until golden, similar to my Best Tomato Sauce Ever recipe.

Cook the garlic/onion/evoo mixture in a smaller pot than the dutch oven you’ll cook the rest of the bolognese in. Stop to admire how everything on your stove matches, including the tablespoon you will later use to measure the tomato paste. I love it when everything in the universe aligns like this. Try not to feel guilty that the pot you’re using belongs to a friend who brought it over last Thanksgiving with some delicious buttered corn and you ‘forgot’ to return it to her even now, nearly a year later. I’m using the term ‘forgot’ very loosely here. I’m sorry, Caren! 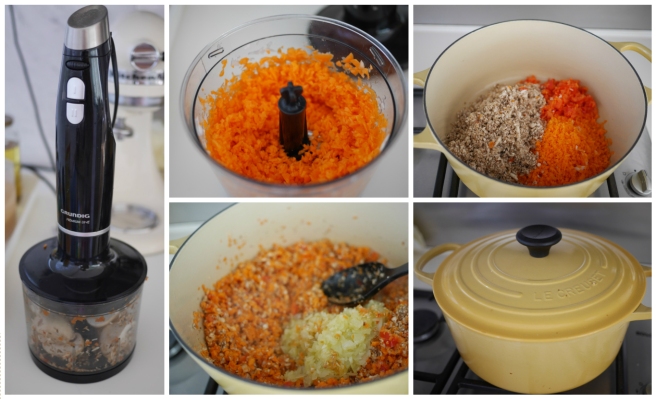 Blitz the carrots, mushrooms, and bell peppers in a food processor until small and add to a dutch oven or other heavy-bottomed pot. Cook on medium heat for a few minutes until they start to soften, then add the garlic/onion/evoo. Give it a mix, cover, and cook for about 5 minutes. Remove the lid and cook for an additional 10-15 minutes until vegetables have lost most of their moisture.

If you don’t have a food processor, don’t go buy an expensive one. The one I have is the 3-in-1 type that also triples as a immersion blender and whisk. It was only S$80. You could theoretically chop all the vegetables by hand but that just sounds miserable. 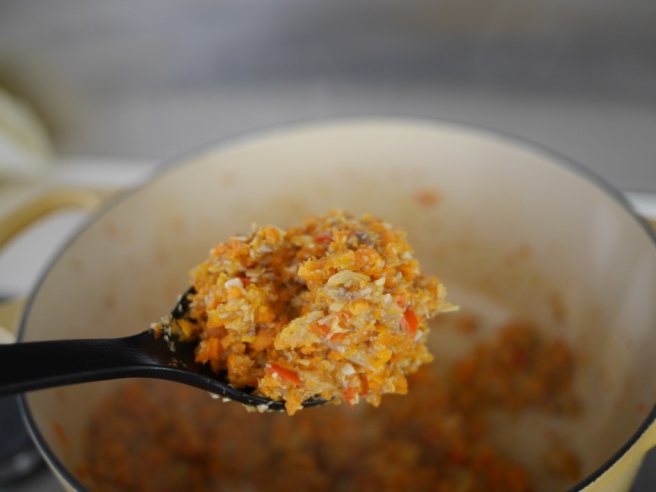 When the texture looks a bit like a child’s vomit you know you’re doing this right and can move on to the next step.

Add tomato paste and cook for a few minutes.
Add wine and cook few a few minutes until most of it has cooked in or evaporated.
Blitz whole tomatoes with their juice in a food processor for a few rounds until tomatoes are chopped but some chunks still remain. Add to sauce along with a jar of tomato sauce.
Add spices: garlic powder, Italian seasoning, red pepper flakes, pepper (I accidentally added way too much pepper because the cap fell off but I didn’t let that deter me), and tamari or soy sauce
Secret pro tip: cut off the hard end of your parm (or, in this case I’m using pecorino romano) and drop it into the sauce.
Cover, leaving 1 cm of space for the steam to escape, and cook over low heat, stirring occasionally. You can cook for as little as 15 minutes up to many, many hours. The sauce will get richer and yummier the longer you cook it. But if you’re impatient like me, 15 minutes will do.

In the meantime, let me share another pro tip with you.

I have never successfully used a whole jar of tomato paste before it goes bad (within a week). So what you can do is line a baking sheet with parchment paper, spoon out 1tbs portions of the paste, stick it in the freezer for 2 hours until frozen, then chuck the frozen blobs into a freezer-safe ziplock bag and take one out every time you need some tomato paste.

Never again will you have to throw out a 1/2 used can of tomato paste. You’re welcome. 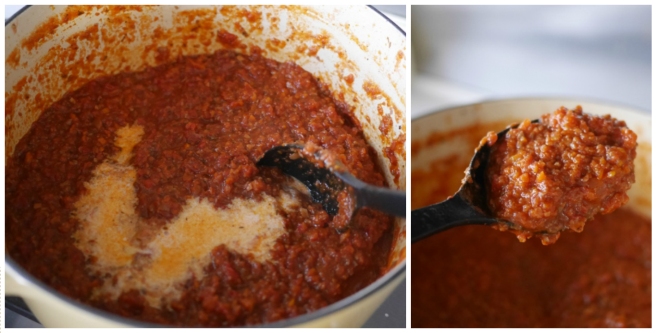 Back to the sauce. Once you’re ready to serve, mix in 1/3 cup of whole milk. Your final product should look like the right photo above. Does that consistency not look perfect? Yum.

(For those wondering: no, you cannot use nonfat, 1% or 2% milk. Use whole milk for goodness sake. And stop buying nonfat milk. Did you know that in the process of removing the fat from the milk, the milk is also stripped of many of its nutrients so it has to be added back along with milk solids to help thicken up consistency ? Avoid all that processing. If you’re going to drink milk, drink it the way God intended: whole.

Did you know that some people think I’m bossy?) 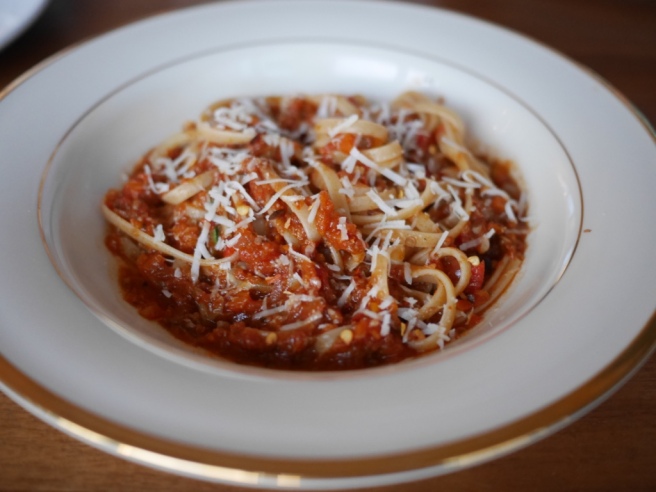 Cook up some pasta and serve with a lot of grated parmesan and red pepper flakes. For the purposes of this photo I only added a delicate sprinkling of parmesan but let’s be real, after snapping the photo I added 10x this amount before stuffing a forkful into my mouth. Enjoy.