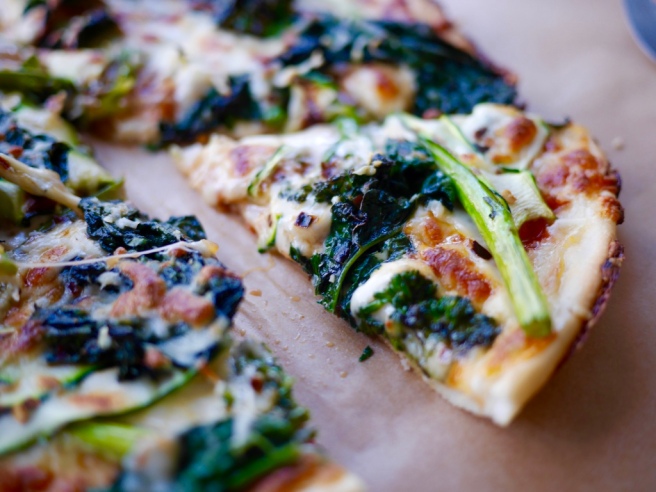 I could eat pizza everyday. Sometimes I eat so much pizza that I make myself sick. Something about that ooey-gooey-melty-cheesy topping over a soft-chewy-crispy crust just makes my life.

In this post I will show you how to:
1) Make pizza dough from scratch – it’s easy
2) Make pizza sauce from scratch – a child could do it
3) Bake a crispy-crust pizza without a gajillion pound baking stone in my small, uneven Singaporean fail oven/microwave 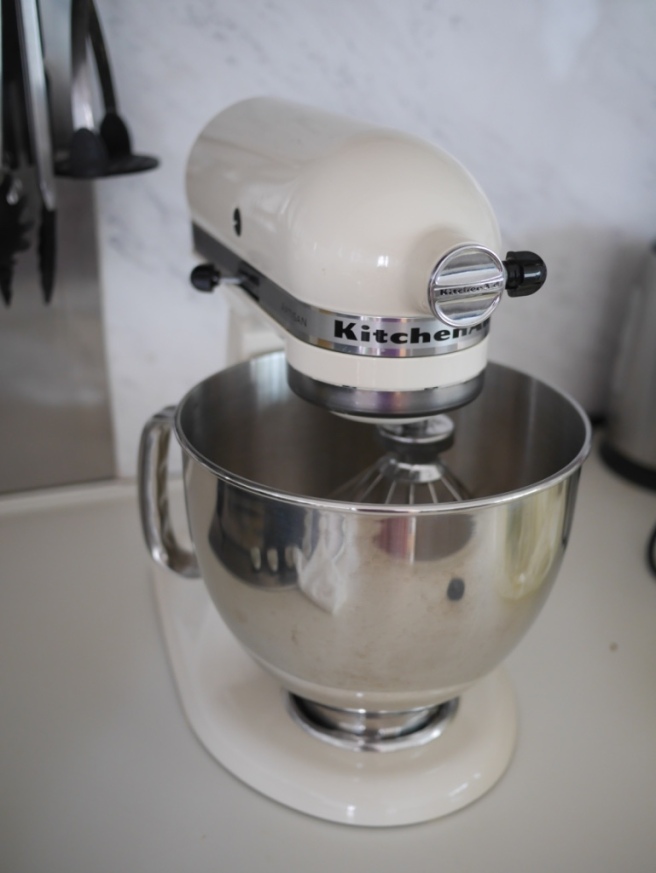 She is on semi-permanent loan to me from my friend Elaine who is about to pop with her third boy and doesn’t see baking bread as particularly high on her priority list for the foreseeable future, or ever. So this gorgeous baby is mine! And I will take good, sweet care of her, the same sweet care I give to my precious kitty, Nugget.

This pizza is:
-savory
-sweet
-spicy
-healthy, kind of

You can use store bought pizza dough, but why do that when you can make pizza dough at home with ingredients you probably already have in your pantry?

In the bowl of a stand mixer, combine yeast, sugar, and warm water and allow to sit until frothy, about 5 minutes. This is called proofing. You basically do it to make sure your yeast is alive. You can skip it if you’d like, but don’t blame me if your dough doesn’t rise and you have to toss everything out and not have homemade pizza tonight. 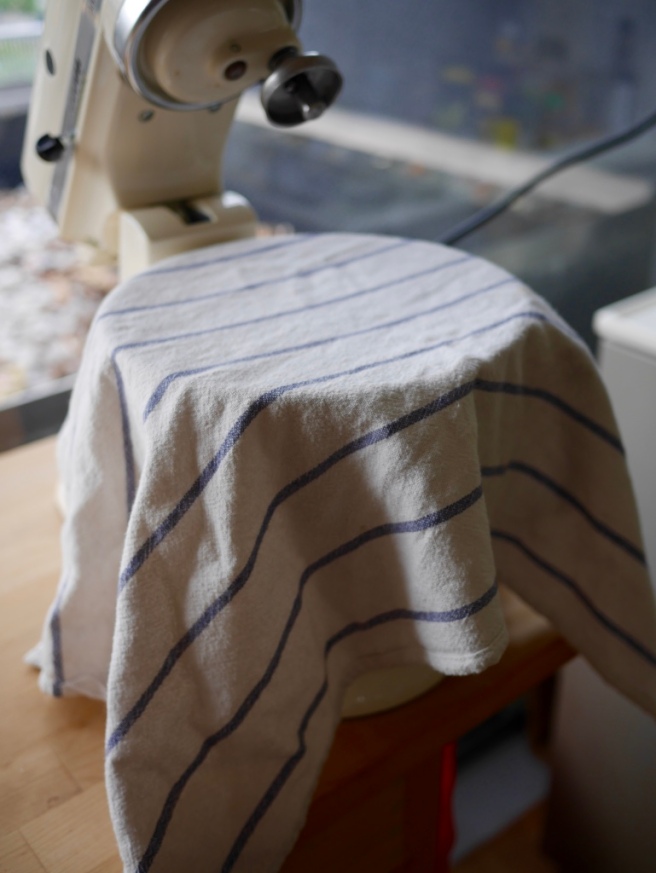 Remove dough from hook, oil the ball of dough and place back into the bowl of the stand mixer. Cover with a dishtowel and place somewhere warm (aka ANYWHERE in your house in Singapore except directly under the AC or in the fridge) to rise until doubled, about 1 hour. If you don’t need the dough until later, you can also cover with saran wrap and chuck it in the fridge for up to 36 hours. Isn’t that handy?

If you don’t have a stand mixer, do not despair. Pizza dough is super easy to make by hand, and requires very little kneading. Just mix all the ingredients together with a spoon, pour it out into a floured surface, and knead until it comes together, about 2-3 minutes.

To make the sauce, assemble the ingredients and blitz them all in a food processor until smooth. Set aside. Please don’t buy store bought pizza sauce. You don’t need high fructose corn syrup, modified corn starch, soybean oil, and a bunch of other icky ingredients on your pizza. You just need tomatoes, evoo, red wine vinegar, Italian spices, and garlic. You actually don’t even need red wine vinegar. Or the spices. Basically what I am trying to tell you is that any variety of homemade pizza sauce will be better than store bought.

Thinly slice the onions and cook over low heat in a cast iron pan with a pat of butter and a tablespoon of brown sugar. This requires patience. You’re going to think you’re finished when the onions look like they do in the middle photo above, but you’re not. Just keep stirring until they get a beautiful golden brown. The longer you cook them, the yummier they will get. Minimum 15 minutes. Up to an hour. Hint: make more of this than you think you will need. You can add caramelized onions to anything.

When done, remove from pan and set aside. If you get lazy at this point, you can honestly make a pizza with just crust, pizza sauce, mozzarella, and caramelized onions and it will be insane and incredible and you will be beside yourself that you, yes little ol’ YOU, can make something so delicious and satisfying. 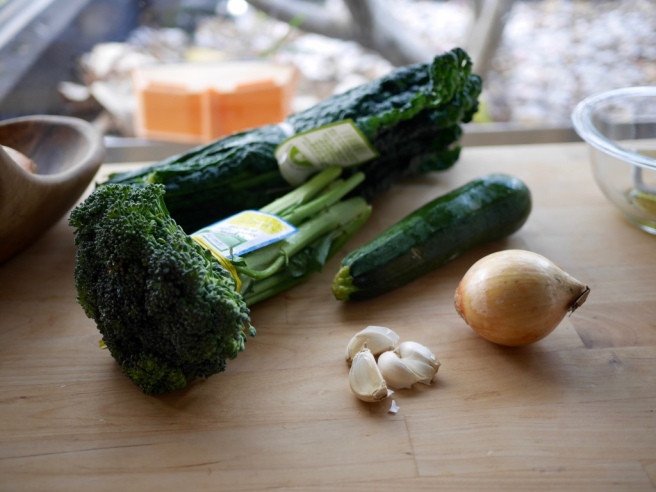 In the same pan as the onions, add olive oil, garlic, and red pepper flakes.sauté until fragrant. Add broccolini, kale, and two tablespoons of water, turning to coat. Cover with a lid and let cook for 5 minutes until soft and  vegetables are deep green. This makes a fantastic side dish. Eat it with quinoa. With a scrambled egg. On toast (I can eat basically anything on toast). 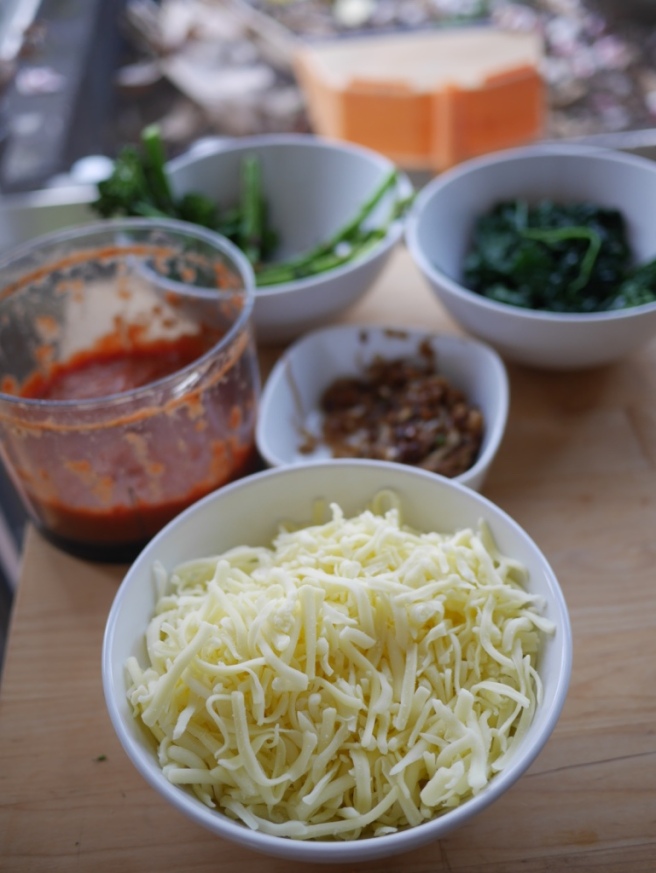 Set all your ingredients to one side to begin assembling.

Remove the dough which by now should have doubled in side, cut in half, and roll one half out into an approximately 10-inch circle. Mine looks more like a square than a circle. Do as I say, not as I do. I am a woman of many talents, but rolling out circles is not one of them.

Oil the bottom of the same cast iron pan you’ve been using this whole time (don’t bother washing between uses, just wipe it with a paper towel) add the rolled dough, top with 1/3 cup of pasta sauce and the rest of the toppings. Isaiah likes his pizza extra saucy. I would say the amount of sauce in the photo above is low average. You can definitely add more if you are a saucy person. I’m a saucy person but I don’t like that much pizza sauce. Some things in the world just don’t add up.

Place the assembled pizza on the stovetop over high heat for 5-7 minutes, until the crust is nicely browned. Chuck it into a preheated 250C/500F oven for 10 minutes until cheese is melted and bubbly. My oven doesn’t have a broil feature but if yours does you can stick it under the broiler for a few minutes to achieve maximum browning/yumminess.

I couldn’t help myself. I took a bite before I could take a photo. It’s just that irresistible.

Preparing the broccolini and kale